Creating relationships and solutions since 1882.

In 1882 F.B. Robertson opened a law firm in downtown Winnipeg, population 8,500. Later that same year after adding more lawyers, the firm became known as Robertson, Andrews & Howard. After the addition of more partners in 1884, the Firm changed its name to Robertson, Campbell and Crawford.

In 1886 Isaac Pitblado began practicing law at a competitor firm in Winnipeg.

In 1888 F.B. Robertson left the firm, and the Firm became known as Campbell & Crawford.

In 1898 the Firm expanded and became known as Campbell, Crawford & Smith.

In 1899 partner, Colin H. Campbell ran for public office, winning a seat in the Manitoba Legislature. He became the Manitoba Attorney-General and served as both the Minister of Education and the Minister of Public Works. During his public service, Mr. Campbell introduced a resolution for the northern extension of Manitoba's provincial boundaries, which would result in Manitoba's present size.

In 1900 the Firm changed its name back to Campbell & Crawford.

In 1904 Edwin Bennest became a partner and the Firm changed name to Campbell, Pitblado, Grundy & Bennest.

After Colin H. Campbell passed in 1914, the Firm became known as Pitblado Hoskin and Company.

In 1919 Isaac Pitblado was appointed by the Minister of Justice to the prosecution team in the trials of nine strike leaders in the Winnipeg General Strike. 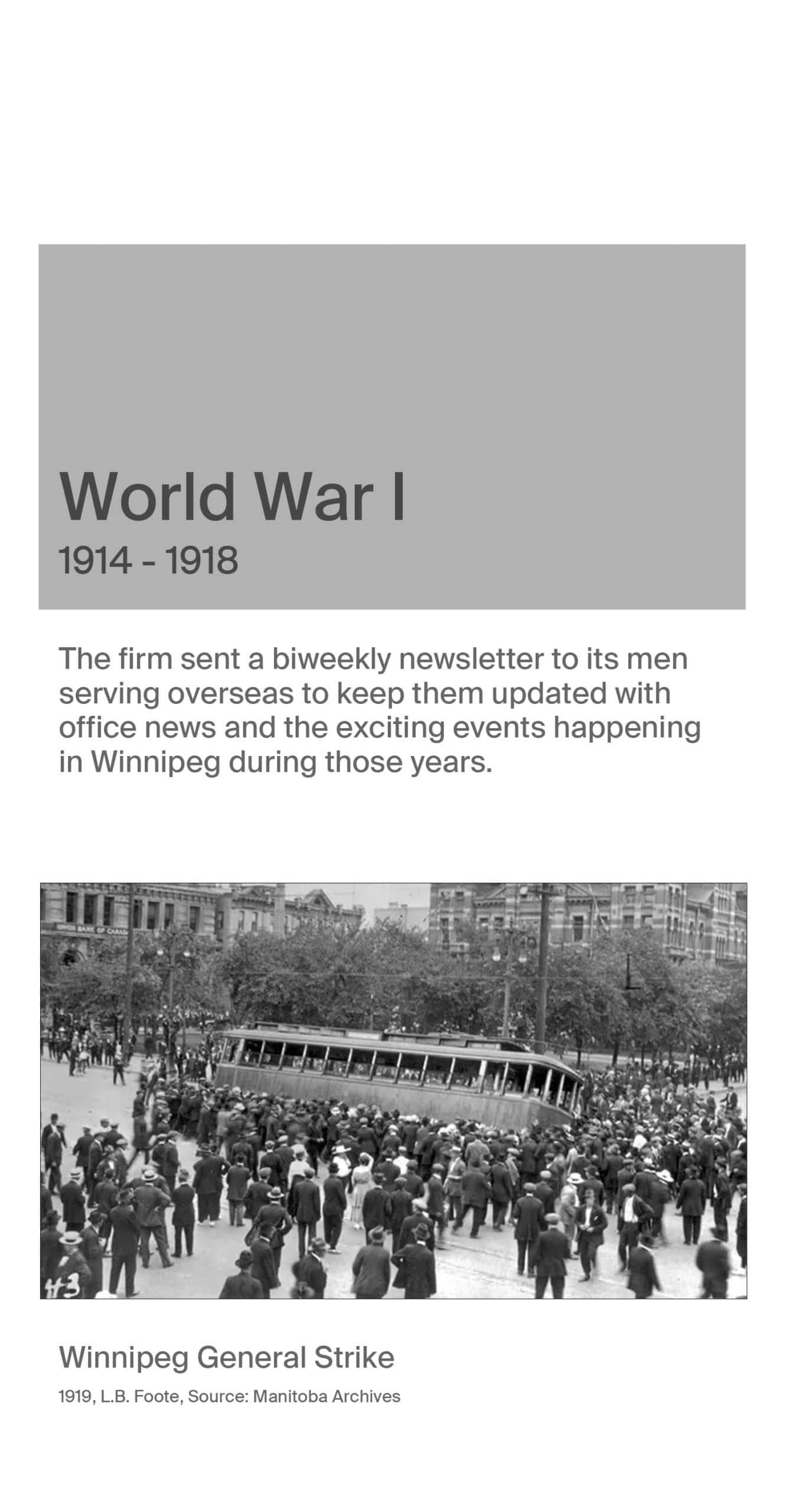 During the 1930s, the Firm adopted the practice of adding the name of every lawyer who became a partner to the name of the Firm. As a result, during this period, there were many name changes associated with the Firm. While the names Pitblado and Hoskin always appeared in the Firm's name, the full name of the Firm continually changed to reflect the addition and departure of various partners. 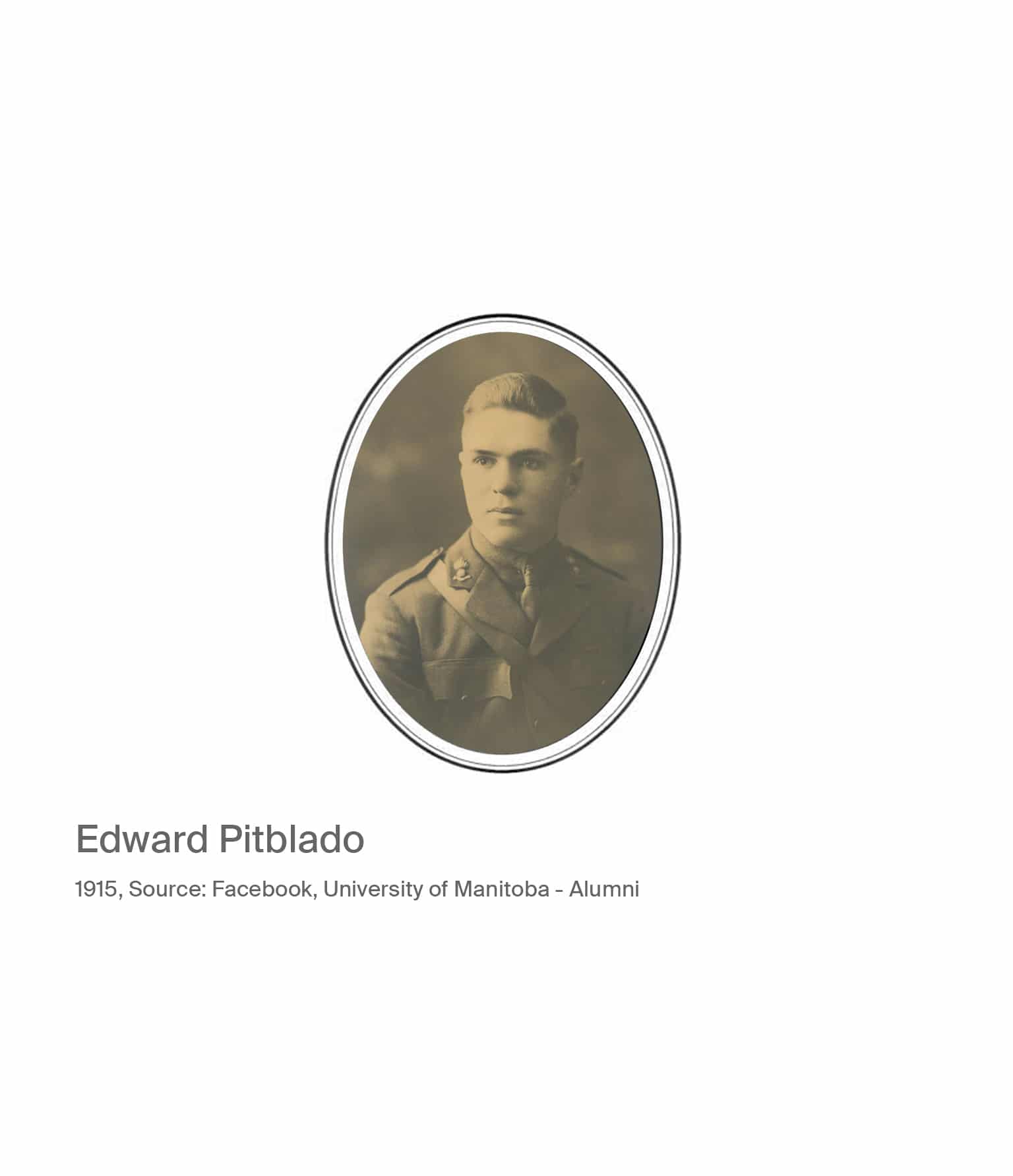 In 1956 the Firm was retained as counsel in Manitoba for International Nickel Company (INCO) in its multi-million dollar development at Thompson, Manitoba. INCO had to build more than a mine; it had to create the entire town as well. The development involved the construction of a branch line off the Hudson's Bay Railway, construction of an airport, the development of the town site with provision of water, roads, sewage facilities, construction of homes, schools and a hospital. Mr. Erskine Hoskin masterminded the entire operation and acted as lead counsel for the Firm on behalf of INCO.

On August 15, 1960, Mr. Erskine Hoskin, Q.C passed away at the age of 88. On December 6, 1964, Isaac Pitblado passed away at 97 years of age. He had acted in an advisory capacity to the Firm until June of 1964. Upon completion of the Richardson Building in 1969, the Firm moved its offices to the new building at the historic intersection of Portage and Main in downtown Winnipeg. 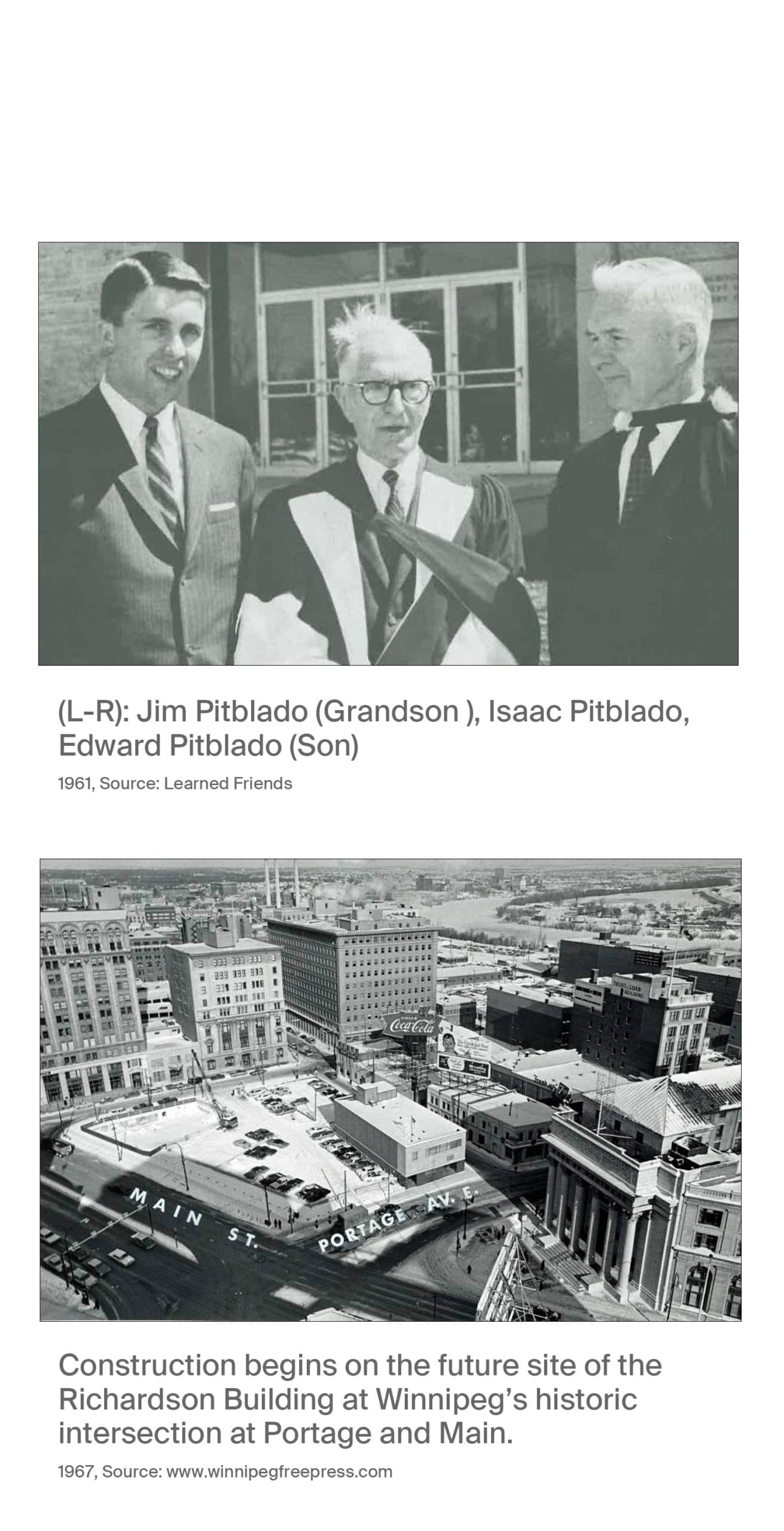 Around 1963, Israel H. Asper formed and founded Asper and Co. and in 1964 the Firm became known as Asper, Freedman and Co. On December 1, 1966, the new law firm of Buchwald, Henteleff and Zitzerman was formed. After a May 1970 merger, the new firm became known as Buchwald, Asper, Henteleff, Zitzerman, Goodwin, Greene & Shead with offices located in the Paris Building in downtown Winnipeg.

In October 1970, Israel H. Asper became the leader of the provincial Liberal party and in 1977 ceased active practice as a lawyer and founded Canwest Global Communications Corporation.

In January 1983 the Firm moved to the 19th floor of 360 Main Street in the newly built Commodity Exchange Tower also located at Winnipeg's Portage and Main.

In May 1986, the Firm, then known as Buchwald Asper Henteleff, opened its new offices on the 24th and 25th floors of the Commodity Exchange Tower at 360 Main Street. The Firm unveiled a two story glass sculpture by an up-and-coming local artist named Warren Carther. The present day Firm still occupies this space and the glass sculpture installed by Mr. Carther remains in place today. Mr. Carther would go on to great renown and his works can be found in Canadian embassies, corporate offices, and airports around the globe. 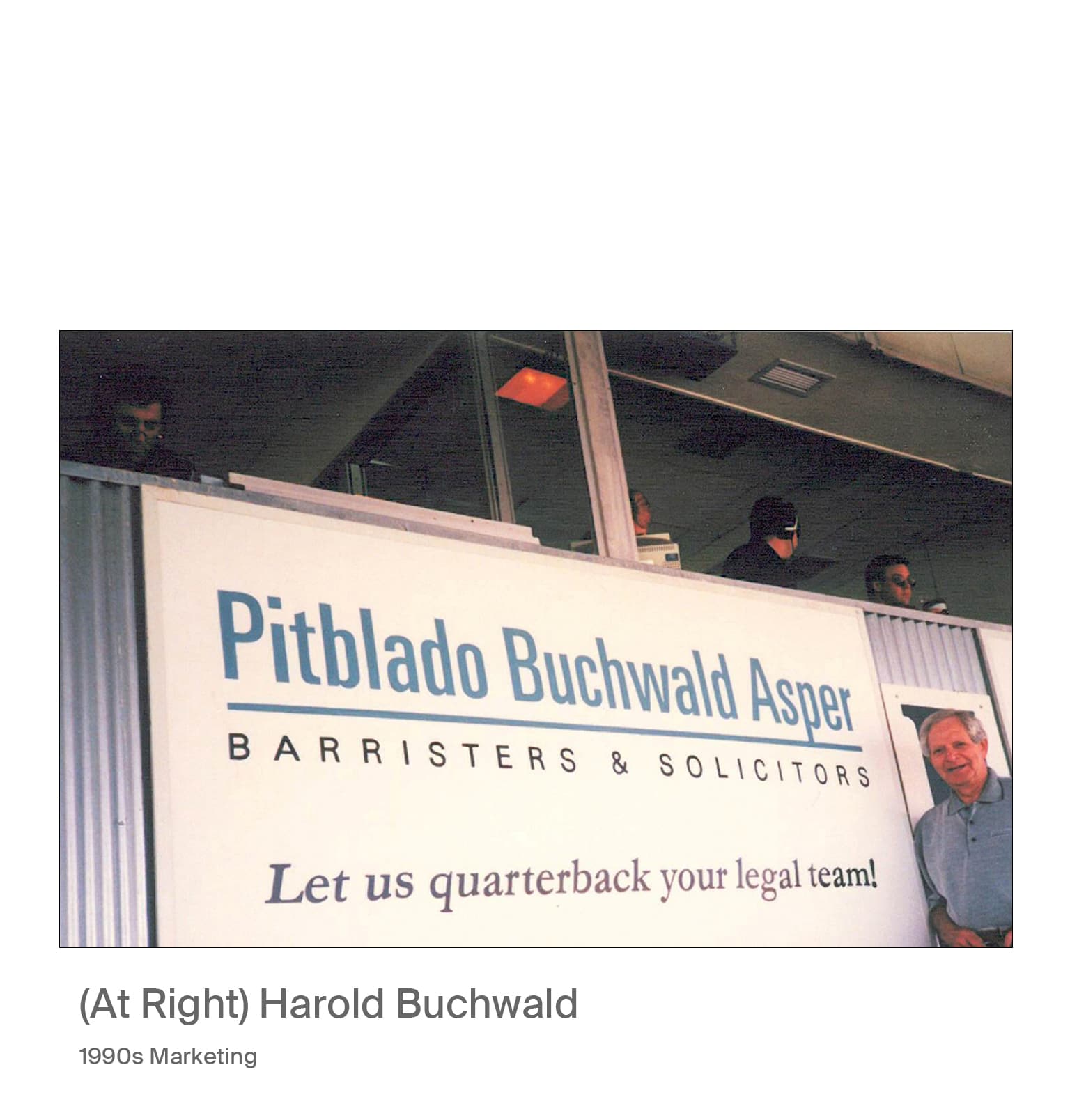 In June 2002 the Firm announced a simplification of its name to Pitblado.

By October 2013 Pitblado had nearly 60 lawyers.

In May 2016, the Firm celebrated 30 years occupancy on the 24th and 25th floors of 360 Main Street and opened an office in Arborg, Manitoba to better serve clients in the Interlake region.

In December 2018, renovations to the Firm's reception area and the creation of a new state-of-the-art Client Conference Centre were completed. 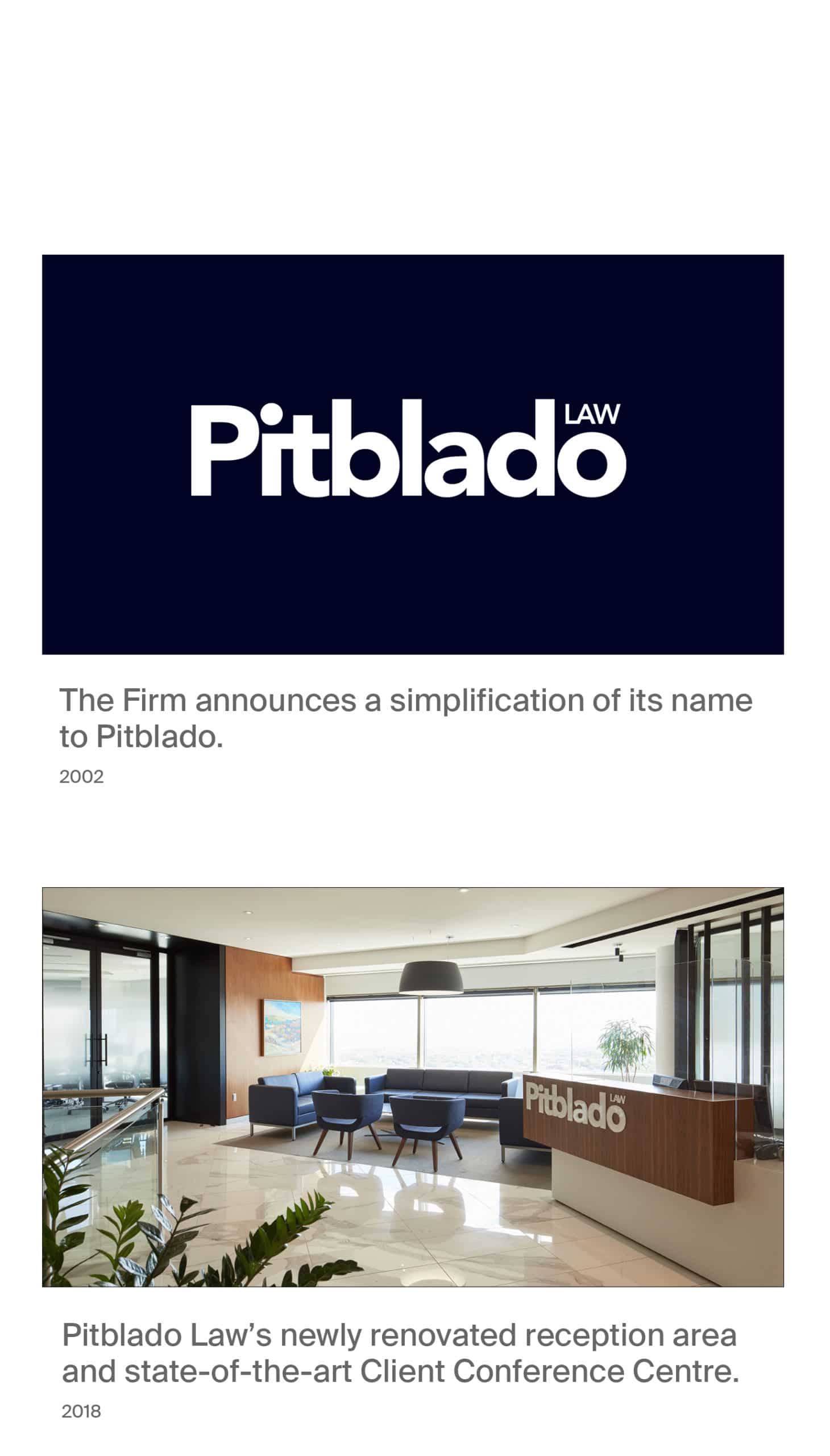 Over the years, the Firm has evolved through changes to its name and brand.

In late 2020 the Firm introduced a redesigned corporate website and announced a focus on three core values: Relationships. Respect. Results.

Today, Pitblado Law proudly includes over 60 lawyers and over 70 staff including paralegals, administrative management, legal assistants and various support services, ready and capable of responding to client needs now and well into the future. 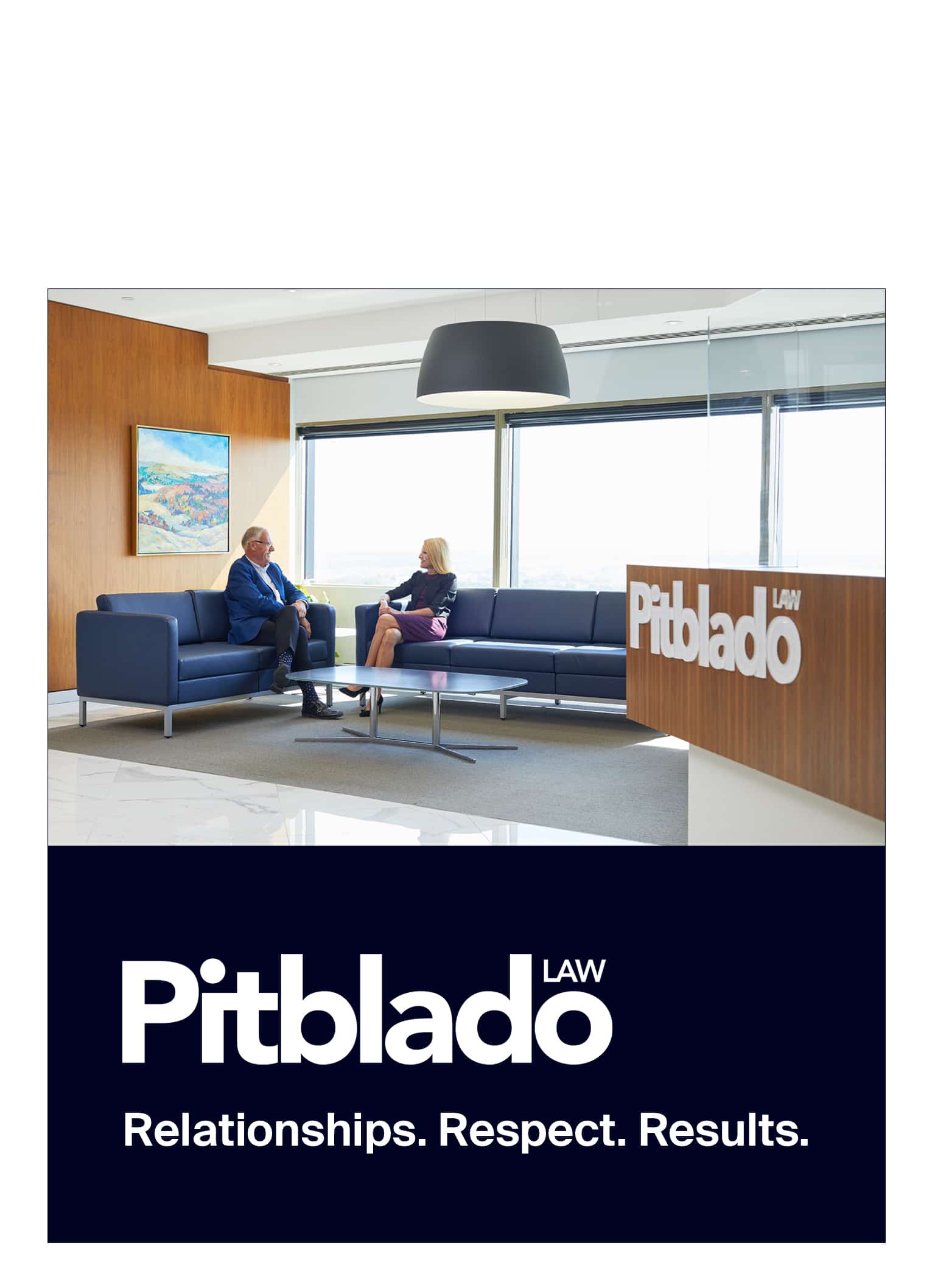